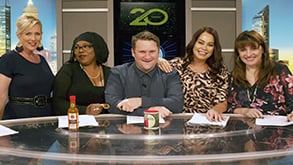 This week, He shook her hand and she claimed assault.What are we coming to? What is in the mind of young people today? PLUS I struggle with the notion of marriage.Is it just a fad that is wearing off? AND He's feeling like a real failure as a dad! He understands that kids have their individual character and a parent’s job is to support them until they can fend for themselves. What do he do if he can’t agree with their values?